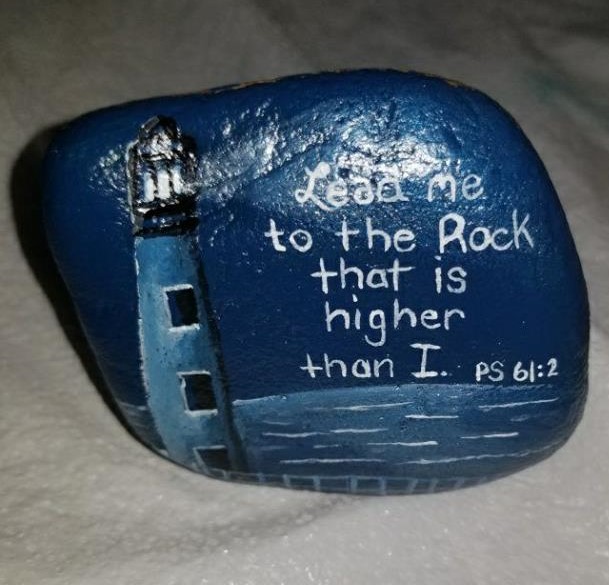 Things have been pretty “rocky” around here lately.  It all started when we decided to make our presence known at the Whitehouse Flower Market by offering painted rocks.  Pat and Howard lugged buckets of rocks home from a Michigan potato field.  The rocks were washed, and some even got a speed dry in the oven downstairs.  Some were sprayed with white paint, and a bunch of us spent hours painting and decorating rock after rock after rock—six dozen at last count.  Finally, they all got a finishing coat of sealant.  We blessed them in worship last Sunday, and the pre-schoolers got a chance to examine them during Bible Time.  And, yesterday, “Zion Rocks” rocks made their debut at the Flower Market.

Some of our rocks were funny, like the ones that looked like monsters, or the great big blue one with an “M” on it that looked like a gigantic M&M candy. (Those were favorites with the preschoolers.)  There was a shark and a strawberry and a ladybug and a dalmatian dog named Spot.  There were plays on words, and words of encouragement: “You are beautiful.”  “Let your light shine.”

And, there were plenty of rocks that recall us to our faith in God and remind us of God’s blessings: “Smile, God loves you.” “I am with you always.” “Jesus lives.” Joy, love, peace, hope, faith.  And, on one that I think was a favorite with everyone, “Lead me to the rock that is higher than I.”

Our passage comes from what is commonly called Second Isaiah. Although Isaiah is treated as one book, it covers quite a long period of time.  So, it is generally accepted that chapters 1-39 contain the words of the prophet Isaiah during the Babylonian exile, and chapters 40 through the end of the book contain the words by and about another messenger who speaks to Israel about its restoration and return to Jerusalem.

This second messenger is not identified as a prophet, but rather as a servant, and he is followed by other servants who carry on his message.  In Chapter 49, we learn that God has called this servant to an enormous job, a job that mirrors the role that Israel is to play in the world. He is to restore Israel to its proper relationship with God, but he is also to be “a light to all nations, that salvation may reach to the end of the earth.”  The servant is to speak words of comfort to a people who have suffered through a long exile, assuring them that their time of trial is coming to an end, that their days of feeling that God had forsaken them are nearly over.  He is to announce that God had forgiven them the sins that landed them in exile in the first place.

In spite of his message of love and forgiveness and hope, the servant was met with resistance.  Perhaps it was because he was not afraid to remind Israel of its sin and the punishment that followed (justly) in its wake. And yet, in the chapters after ours, we hear from those who followed him that he met his adversaries and even his death with grace.  This is recorded in what we call the “suffering servant song” which we often read on Good Friday—familiar verses that speak of the servant as a man who was “despised and rejected by others; a man of suffering and acquainted with infirmity, wounded for our transgressions, crushed for our iniquities, like a lamb that is led to the slaughter”—words that would later be used about Jesus.

So, here we have a servant chosen by God to deliver a message of salvation—to tell God’s people that their long estrangement is over, and that their exile is coming to an end.  It soon will be time to return to Zion. Through the servant, God speaks to all those who have been longing for this moment, who have been pursuing righteousness and seeking the Lord.  God lists the wonderful changes that are in store: Zion will be comforted, full of joy and song.  What was desert will be fruitful.  God will be the teacher—the one whose justice will be the light and hope for all people.  The deliverance that is coming will last forever.

These are bold promises to make to a people who have been in exile for decades.  Maybe they were feeling discouraged at this point, as one world power was fading and another was ascending, while Israel was still in exile. Maybe they were thinking that God had forgotten them.  The new generations who had come along during the exile knew the holy city of Zion only from the stories their elders told around the fire after dinner.  Maybe as they heard those stories, they glanced at each other skeptically, sure that dreams of future glory were merely that: dreams.

We have a long history of God doing great things in our lives and in this place.  But we also have desert times.  You know what that’s like.  Life is going great and then what seemed like a minor health annoyance turns out to be a serious illness.  You have a job you love; then new management takes over, and with it your job changes or disappears.  You listen sympathetically to the anguish of parents over their children’s involvement with sex or drugs or alcohol, relieved that you don’t have those problems, until the police call and ask you to come down to the station.  Then you enter what seems like a wilderness with no end in sight.

Churches have similar stories: times when the church was booming, land purchased, building plans drawn up. Then there were wilderness times, with conflict, declining membership, and lower giving.  It became harder to see beyond the wilderness to what the future might hold.

As God prepared to make bold statements about what was to come for the people of Israel, God probably knew that long years of exile might have drained Israel of hope. God knew that they needed something to remind them that, throughout their people’s long history, God had kept God’s promises.  Israel had a history with God, a history that spoke of what God had done and that pointed to what God would do. And so, to prepare them for the wonderful promises to be made, God says this: “Look to the rock from which you have been hewn, and to the quarry from which you were dug.”

The particular rocks that God points Israel to are Abraham and Sarah, and the garden of Eden.  All three carry images of productivity and fruitfulness and new life. God calls on Israel to remember that Abraham was one man following God’s call on his life, and Sarah was an elderly woman who had never borne children.  But through them, by God’s power, a mighty people came to be.  God calls on Israel to remember Eden, that unspoiled world of beauty and abundance that human beings were meant to inhabit.  These were the starting points for the people of Israel, and God calls on them to remember that.

Because God is going to give them a chance to start again and to live anew what their ancestors had before them.  But it’s more than just a continuation of what faithlessness and exile interrupted. They would be given a clean slate.  They would be given a brand-new chance to be fruitful and grow.  God would take what had been their waste places, their wilderness, their desert, and make it that unspoiled Eden again.  The earthly powers that Israel had looked to would evaporate, and in their place would be only God’s teaching, righteousness, and eternal salvation.  As God did new things in the garden of Eden and in the lives of Sarah and Abraham, God would now do new things in the lives of the people of Israel.

God is willing to do the same thing in our lives and in the life of this church.  As individuals and as a congregation, we come from a deep and rich tradition of prayer, presence, gifts, service, and witness.  But as we wait to see what God has in store for us, we must remember that we are hewn from an even richer rock than that.  We are hewn from the rock of Jesus Christ.  Whatever earthly things came before in our personal or communal lives, he becomes our point of origin when we turn our lives over to him.

As God promised Israel a clean slate after the exile, we are given a clean slate in Jesus.  Where Israel was promised a newly fruitful, Eden-like Zion, we are made newly fruitful by the power of the Holy Spirit, whose presence produces fruit in us: love, joy, peace, patience, kindness, generosity, faithfulness, gentleness, and self-control.

As we grow individually in fruitfulness, this church becomes newly fruitful as well. Just as God promised Israel more than simply a chance to pick up where they left off, we are given the opportunity to start over as new people in a newly fruitful place.   As Paul said to the Corinthians, “If anyone is in Christ, there is a new creation: everything old has passed away; see, everything has become new!”

The struggle for us is to accept this gift of new life.  We want to hang on to what came before, both good and bad.  We speak longingly of how things used to be and mourn the things that went wrong.  We neglect to look for the new ways God is working in this world, in this church, and in us.  We are skeptical that new glory awaits, and we are uncertain about how we go about writing a new story on a blank slate.

This is when we need to return to God’s word.  We look to the rock from which we have been hewn, and to the quarry from which we were dug.  There we find our Savior Jesus—the light to the peoples, the bearer of deliverance and salvation, the source of joy and gladness, thanksgiving and song.  We look to Jesus Christ, whose life wiped the slate clean so that we can be free to new ways.  Amen.