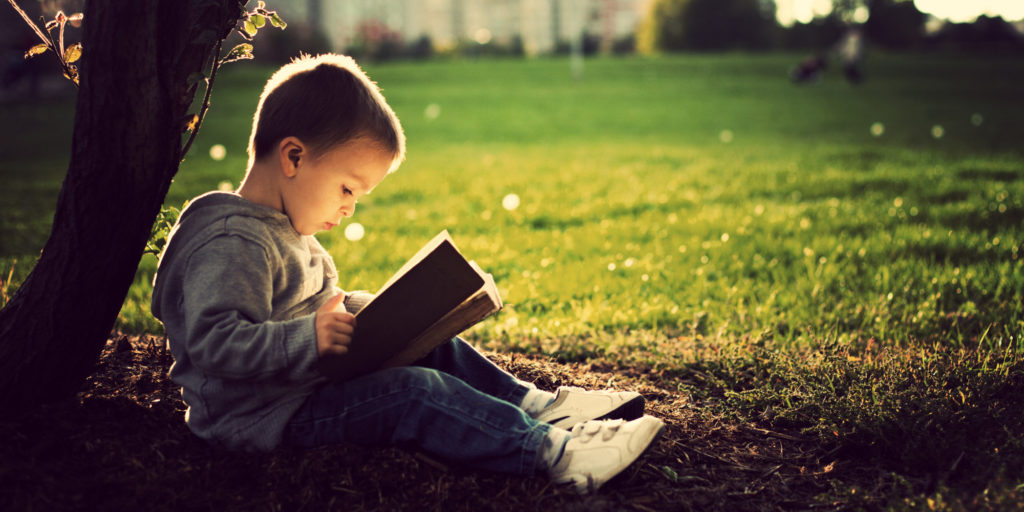 When Peyton was very small, I would tell her a special bedtime story every night.  We would turn off the lights and I’d lie next to her on her bed, and I’d tell her the story of “Peyton’s Busy Day.”   It always began the same way: “One day, a little girl named Peyton woke up.”  And then I’d proceed to tell the story of everything Peyton had done that day until the end when I’d say, “And she climbed into bed, and turned out the light, and that was the end of the b-u-s-y day.”

Each one of us has a life story, not just about what we’ve done but about who we are.  Some parts we write ourselves.  Many parts are written by others and told to us over and over.  The stories we tell ourselves and the ones others tell us can help build us up and encourage us to be our best selves.  But, other stories can be hurtful.  They belittle us. They place limits on us and rob us of our confidence that we can be what God has created us to be.

Like us, David had childhood stories.  Some were affirming and told good things about him.  Others sent a different message.  Those other stories told him that he was insignificant.  They questioned his character.  They’re the ones we rarely read in church.  Today I want to share some of the good and not-so-good stories from David’s childhood and think about how they might have shaped him into the person he was, just as our stories shape us.

The first story is about when David was chosen by God and anointed by the prophet Samuel to be the future king of Israel.  The current king, Saul, had turned out to be a big disappointment.  Samuel tells us, “The Lord was sorry that he had made Saul king over Israel.” So, God sent Samuel to a man named Jesse to anoint Saul’s replacement.  Samuel invited Jesse and his sons to a sacrifice, where God would show Samuel which son to anoint.  Samuel considered seven sons in turn, but each time he thought he had the right one, God said, “No, that’s not the one.”

Then Samuel asked Jesse, “Do you have any more sons?” Jesse answered, “There is still the youngest, but he is out taking care of the sheep.” “Tell him to come here,” Samuel said. “We won’t offer the sacrifice until he comes.” So Jesse sent for him (1 Samuel 16:11-12a GNT).

Samuel had invited all Jesse’s sons to the sacrifice—not the oldest or biggest or smartest sons, all of them.  But, when the selection process began, there was no mention of the fact that one son was missing.  Jesse didn’t say, “Wait!  I have another son!   I need to call him in from the fields.”  There’s no mention of this son at all until Samuel asks, “Are these all of your boys?”  “Oh, yeah,” says Jesse, “there is the youngest one.”  Jesse doesn’t even call his youngest son by name. And, he doesn’t volunteer sending for David; Samuel has to tell Jesse to do it.

What does this story tell David about himself and his place in his family?  That he is unimportant?  That he is beneath notice?  As a sister who has some experience in being tormented by her brothers, I can pretty much guarantee you that David’s older brothers made sure he knew that he was merely an afterthought, especially later on, if there was some jealousy over his being chosen over them.  And, if he was treated as an afterthought then, how many other times had he been told he was unimportant—the youngest of eight sons who didn’t really merit any notice, a little boy that no one expected much of, good only for watching the sheep in the field?

The same theme continues in the next chapter.  David’s big brothers followed Saul into battle against the Philistines, but David had to go back and forth from keeping the sheep to playing music for Saul when he needed soothing.  Apparently, he wasn’t even that necessary to the sheep, since he was the one his dad sent to take supplies to his older brothers and to bring back a report about how his brothers were doing.  Samuel tells us that David left the sheep with another shepherd and set out early the next morning with the supplies, as Jesse had directed him.

David got to the camp just as the Israelites were leaving for the battlefield. Soon the Israelite and Philistine forces stood facing each other, army against army. David left the things he had brought with the keeper of supplies and hurried out to the ranks to greet his brothers. As he was talking with them, out came Goliath. David heard Goliath shouting his usual taunts to the army of Israel. As soon as the Israelites saw Goliath, they began to run away in fright.

“Have you seen the giant?” the men asked. “He comes out each day to defy Israel. The king has offered a huge reward to anyone who kills him.” David asked the soldiers standing nearby, “What will a man get for killing this Philistine and ending his defiance of Israel? Who is this pagan Philistine anyway, that he is allowed to defy the armies of the living God?”

When David’s oldest brother heard David talking to the soldiers he was angry. “What are you doing around here anyway?” he demanded. “What about those few sheep you’re supposed to be taking care of? I know about your pride and deceit. You just want to see the battle!” “What have I done now?” David replied. “I was only asking a question!”

Imagine how David must have felt.  He was doing exactly what his dad had asked him to do, but his brother assumed the worst.  He immediately made David know how unwelcome he was.  He belittled David’s job—caring for those “few sheep.”  He assumed David had irresponsibly left his post. He called David proud and deceitful and implied that he was selfish. What a story for David to be told about himself.

Because of his conversations with the soldiers, David came to the attention of Saul.  When David asked to go up against Goliath, it was clear what Saul thought.  Saul said, “You can’t go against that Philistine, you’re just a boy!” When Saul decided to let David have his chance, he loaded his own armor and weaponry on David, sure that David’s equipment wasn’t sufficient to slay a giant.  Saul meant well, but his well-intended words and actions told the story of his  doubt in David’s strength and ability.

You’d expect the enemy to trash talk his opponent.  Goliath took one look at David and, “disdained him” for his youth and good looks.  He saw the Israelites’ sending out a clearly incompetent kid like David as a sign of disrespect.  And so, he taunted David: “C’mon over, kid, and I’ll make you into kibble for birds and wild animals.” Enemy or not, Goliath’s words still had the potential to make David feel weak and afraid.

Do any of these stories ring a bell with you—maybe make your stomach knot up a bit?  Do they bring back memories of being bullied or berated or excluded, or told you weren’t good enough, smart enough, strong enough?  The childhood stories that are told to us through school yard taunts or critical family members can continue into our adult lives.  We’re told that we’re too fat or too thin, too loud or too quiet, too bossy or too mousey.  We hear it in person, we see it in social media, and we sense it when a room gets quiet when we walk in.  Sometimes the stories aren’t even told with words.  Sometimes they’re told with rolled eyes or raised eyebrows or a turned back.

It’s bad enough when others tell us stories that tear us down and wear us down.  But what’s worse is when we tell ourselves those stories.  The negative stories become narratives that run on an endless loop inside our heads and hearts.  And, the longer those stories run, the more we internalize them. We tell ourselves that we aren’t worth much.  We tell ourselves that we, like David, are insignificant, powerless, and ill-equipped.  We are stupid, ugly, poor, lazy; the wrong color, gender, age.  We live in the wrong neighborhood, hang with the wrong people, use the wrong language, have the wrong motivations. We’ve always been a problem, we’ll never change, and we’ll never amount to anything.  We begin to believe that our failures in the past doom us to failure in the future.  We feel unlovable and undeserving of love.  It’s so easy to hear and tell ourselves stories like the ones David heard and make them our own.

Fortunately for David, there were other stories being told about him—positive stories.  Someone had noticed that David was a good musician, that he was strong and heroic, prudent in what he said, and already showing signs of being a good warrior.  They recognized that God was with him.  Those were the stories someone told Saul.  And, after Saul made David his personal musician, Saul sent back more positive stories to David’s dad.

It seems that the stories David told himself were positive ones.  When his big brother criticized him, David stood up for himself.  When Saul raised doubts about David’s ability to confront Goliath because of his youth and inexperience, David drew strength from his own stories of bravely guarding his sheep and defending them from the attacks of ferocious animals.  Where Saul saw deficiencies that needed to be compensated for, David claimed competency and confidence in his own abilities and tools.  Where Goliath saw a pipsqueak playing with pebbles, David knew himself to be empowered by God.

And that is the most important story David could tell himself—that the Lord was with him.  He could rely on his story of how the spirit of the Lord had come mightily upon him when Samuel anointed him as the future king of Israel.  When he heard the negative, belittling stories, he could recall the more important story—that God was with him.

But we also share that most important story: that God is with us.  We can tell ourselves the story of being God’s beloved children.  We can listen to the Holy Spirit whisper God’s story into our hearts: “Do not fear, for I have redeemed you; I have called you by name, you are mine, because you are precious in my sight, and honored, and I love you.”

This is the story that begins with being fearfully and wonderfully made in our mother’s wombs, and it continues when we accept Christ as our Lord and Savior.  This is the story that the Holy Spirit seals on our hearts at our baptism and assures us that our life story doesn’t end with our earthly deaths but will continue eternally through our faith in Jesus.

Like Peyton’s bedtime story, our life stories describe what we’ve done.  They also describe who are—at least, who we think are and who others think are.  But our most important story is the life story that God tells us.  It’s the story about what God sees in us, and what God sees for us, and what God has done for us.  God’s story is not only life-describing; it’s life-giving. And that’s the story we need to listen to, every day and every night.  Amen.