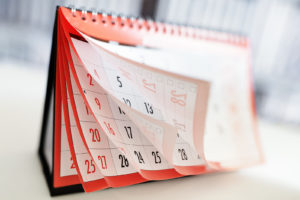 I am a fourth-generation crossword puzzle solver.  My Great-Grandpa Ackerman began doing crosswords soon after the first ones were published in 1913. His daughter, my Grandma Williams, did hers in green pen.  I would find her son, my dad, doing his puzzle at the kitchen table every morning when I woke up.  I started doing the Blade’s puzzle when we moved to Toledo and for my birthday thirteen years ago, Marc gave me a subscription to the online version of the New York Times Crossword Puzzle; I’ve been working it ever since.  I’m happy to say that Peyton is carrying on the family tradition.

Crossword puzzles are created according to certain rules.  They have to fit into particular sizes of grids, they have to be diagonally symmetrical, and two-letter words are not allowed.  And that’s too bad, because it’s surprising how much meaning can be packed into a two-letter word.  Take the word “of,” as in the sermon title: “The Future of a Place Called Zion.”  I looked it up and, in the dictionary I checked, there are fourteen different definitions for that little word “of.”

Definition number four indicates the nature of something.  We might speak about God as having the love of a parent.  The “future of Zion” suggests that this future embodies the qualities or nature of God’s holy Mt. Zion.  Definition number seven, on the other hand, indicates possession, connection, or association.  A person is “the child of” someone. The future of Zion is the future that belongs to or is associated with a place called Zion. So, to speak of the future of Zion is to speak both about the nature of that future and our claim on it.

Isaiah lived and ministered through the reigns of several of Judah’s kings, beginning with Uzziah and later Uzziah’s son Jotham, who were pretty good kings.  But even then, 2 Chronicles tells us, “the people still followed corrupt practices.”  When Jotham’s son Ahaz became king, he himself followed those corrupt practices and did not do what was right in the sight of the Lord.  He made images for the Baals.  He sacrificed and made offerings to other gods on the hills and high places and under the trees, according to the practices of other nations.  He even sacrificed his own sons by fire. During Isaiah’s ministry, the rise of Assyria threw the political and military landscape into a turmoil, as countries came together in alliances and then separated to fight each other in their efforts to protect themselves from Assyrian domination.

Isaiah the prophet—the truth-teller—saw clearly the ills of the world around him and spoke boldly of what God revealed to him. From his place in Jerusalem with access to the kings of Judah, he observed the practices and behaviors that would certainly be Judah’s downfall. And so he prophesied, speaking words of chastisement about how the people were living and warnings about the coming consequences, as God revealed them to him.

In the first chapter of Isaiah, we learn how bad the situation is.  “Ah, sinful nation,” Isaiah says, “people laden with iniquity, offspring who do evil, children who deal corruptly, who have forsaken the Lord, who have despised the Holy One of Israel, who are utterly estranged! Why do you seek further beatings? Why do you continue to rebel? The whole head is sick, and the whole heart faint. From the sole of the foot even to the head, there is no soundness in it. . . How the faithful city has become a whore! She that was full of justice, righteousness lodged in her— but now murderers! Your silver has become dross, your wine is mixed with water. Your princes are rebels and companions of thieves. Everyone loves a bribe and runs after gifts. They do not defend the orphan, and the widow’s cause does not come before them.”

Not much explanation needed here; Isaiah speaks clearly and pulls no punches.  The abandonment of justice and righteousness, a failure of leadership, bribery and pay-to-play run rampant.  And most poignantly of all, there is the neglect of the widow and orphan.

Isaiah is not speaking simply of women who have lost their husbands or children with no parents.  The Hebrew word for widow comes from a word meaning “silent” or “unable to speak.”  In Scripture, the widow is a symbol of the poor and the powerless, those who don’t have a voice, those who lack the material and social necessities for existence and have no one to advocate for them.  Similarly, orphans are those who are helpless and exposed to injury, without friends or connections.  They are symbols of vulnerability.

I wonder if Isaiah might have very similar things to say about our nation and our world today.  I think that we should carefully consider Isaiah’s words—not as a crystal-ball prediction of what would happen thousands of years after he lived, but as a wake-up call for us to be alert and to make a clear-eyed assessment of what is happening around us.

Because, what was happening in Judah was breaking God’s heart:  God laments, “I reared children and brought them up, but they have rebelled against me. The ox knows its owner, and the donkey its master’s crib; but Israel does not know, my people do not understand.” God mourns the empty worship engaged in by people who have blood on their hands: “I cannot endure solemn assemblies with iniquity. Your new moons and your appointed festivals my soul hates; they have become a burden to me, I am weary of bearing them.”

God pleads with the people of Judah to change their ways: “Wash yourselves; make yourselves clean; remove the evil of your doings from before my eyes; cease to do evil, learn to do good; seek justice, rescue the oppressed, defend the orphan, plead for the widow.”  God promises that with renewed obedience will come blessing but adds a warning for those who continue in their current path: “If you are willing and obedient, you shall eat the good of the land; but if you refuse and rebel, you shall be devoured by the sword.”

It sounds pretty hopeless.  And, in fact, as we look at the world around us, we might be tempted into hopelessness as well.  But, in the midst of the gloom, God offers a ray of hope. Amidst the evil and turmoil of that ancient world were a few survivors—a remnant from which a righteous Jerusalem would be rebuilt.  The judges and the counselors would be as they were in the beginning, and Zion would once again be called a city of righteousness, faithful, and redeemed by justice.

And then, just as two little letters can hold so much meaning, Isaiah uses three short verses to paint a glorious picture of Zion and the future it represents.  The mountain of the Lord’s house will be the highest of all hills and mountains. All nations—not just the people of the covenant but all people will be drawn to this holy place. All people will be united in their desire to learn God’s ways and to live them out. For it is in Zion where they can find the instruction they need.  It is to Zion where they can bring their differences and their disagreements, and God will sort them out.

As throughout history, there will be disputes among the nations, but they will no longer be settled by war and violence against each other.  Instead of devoting itself to what Eisenhower called a military-industrial complex, Zion will see the implements of war turned into tools of peace, and the means of destruction transformed into the means of nourishment and health.  Judah’s considerable resources will be used for freedom and life rather than slavery and death. What a glorious future the future of a place called Zion is!

And this is a future we can claim for ourselves.  In this little outpost of God’s kingdom, we are among the remnant that claims the future that the Zion of Scripture represents.  And to the extent that we claim that identity, proudly and boldly, we will begin to see the future of Zion playing out right here, in the heart of Whitehouse.

I have access to a demographic data base that says that, as of 2012, 56.1% of the residents of Whitehouse have no connection with a faith community. With a population of about 4500, that means that more than 2500 people need what we have to offer in this place—a relationship with God through Christ, lived out in a family of faith.  We are taking steps to grow closer to them, so that one day they may see that this place called Zion is a place where they can find instruction and the word of the Lord.

We may not be able to set the policies that will turn the world’s nations from war to peace, although I hope you are in regular contact with the elected officials who can.  We may not be able to end hunger and poverty, although I hope that you advocate for those who are voiceless and vulnerable.  But we are part of a world-wide Church, and we share with Christians around the world a commitment to bringing about a world of righteousness and justice and peace.  United as the one Body of Christ, we share an interest in and a claim on the future represented by the Lord’s holy mountain of Zion.

Today is World Communion Sunday—a day which symbolizes our unity with Christians throughout the world.  From the largest, multi-campus mega-churches with their state-of-the-art media systems to mud huts in African villages to house churches in Korea and all points in between, we all share our hope in the future of Zion—a future of love, peace, joy, compassion, justice, and right relationships with God through our faith in Jesus Christ, our Savior.  Although we may be physically separated—maybe by a few blocks, maybe by thousands of miles—we are, all of us, eating and drinking at one table: the table of the Lord. And we all share one vision of the future—the future of Zion.

There’s a lot of meaning packed into that little word “of”—fourteen definitions’ worth. But two of them speak to our future.  The future of Zion is a future of unity, peace, justice, and righteousness.  As inheritors with Jesus of the kingdom of God, that future belongs to us.  We have only to claim that future and live into it every day, in this place called Zion.  Amen.