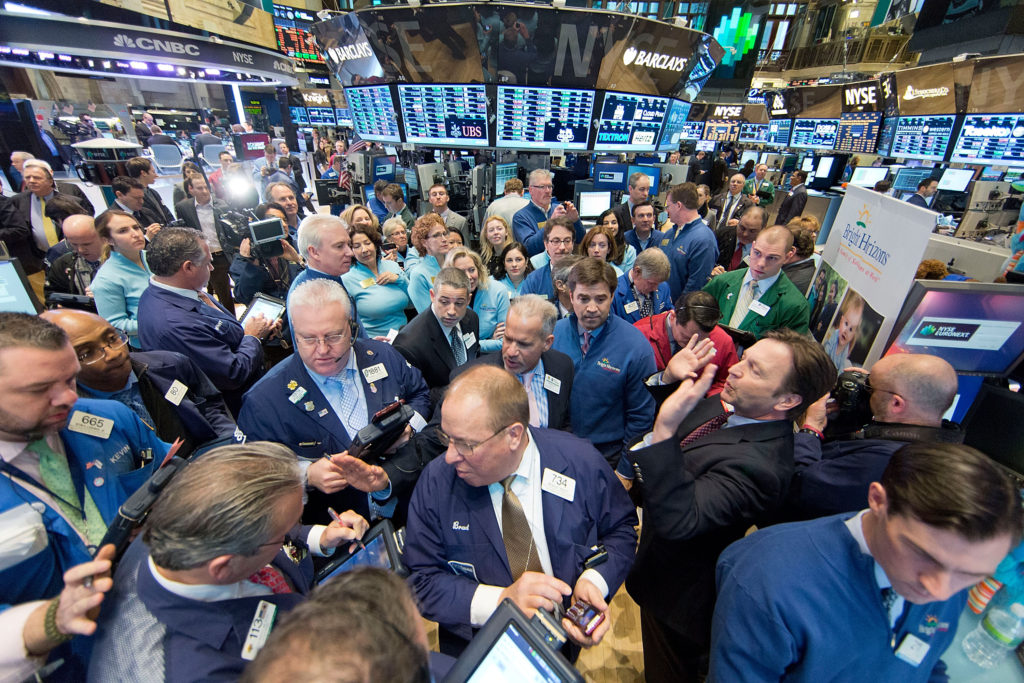 When it comes to money in our house, I take care of the day-to-day things—I make sure there’s money in the checking account and all the bills are paid.  Marc handles our long-term savings.  When Peyton was growing up, he set up her college savings account, and he takes care of investing for our retirement and for a rainy day.  What I know about investing you could write down on a post-it note—the small size.  But I do know one thing: high rewards generally involve high risk. And, as I thought about our passage this week, I realized that every character in our story was faced with a high-risk investment decision.

Jesus told his “parable of the talents” in what has come to be called the “Judgment Discourse”—the words Jesus spoke to his disciples, just a few days before his crucifixion, about the coming judgment.  He had entered Jerusalem, created a scene in the temple courtyard, and had some pretty tense words with the Pharisees and Sadducees.  Later, he was talking privately to his disciples, as we talked about last week. In answer to their questions, he spoke to them of the coming judgment—how they needed to live every day prepared for that day.  And then he offered them a series of parables that elaborate on what the kingdom of God and its coming will be like.  Last week’s story of the wise and foolish bridesmaids was the second in the series.  Today’s “parable of the talents” is the third and last.

A man is getting ready to go on a journey, so he calls in his slaves and entrusts his money to them. And he hands over a lot of money.  One talent was about what a day laborer in that time could expect to earn in 15 to 20 years!  For someone working full-time at Ohio’s minimum wage, that could be more than $325,000. The five-talent slave is entrusted with the equivalent of well over one and a half million dollars!  Altogether, we’re talking about more than two and a half million dollars that this man has just handed over to his slaves with no instructions on what to do with it and no indication of when he might return.

That sounds pretty risky to me.  Now, it may not have been as risky from a 1st century perspective as it sounds to us; in the ancient world, slaves could have great responsibility and authority in their masters’ households and businesses.  So, trusting the slaves to manage his money in his absence may not have been such a strange decision for the master. Someone needed to pay the bills and keep things going.  And Jesus does say that the man took the slaves’ varying levels of ability into account.  But still!  The least capable slave was responsible for hundreds of thousands of dollars! That is a lot of money in my book, especially to simply hand over with no instructions, no matter how much I trusted the people I gave it to.

So, that’s the first piece of risky business in this story.  The master had something of great value that needed to be cared for in his absence.  And he gave the responsibility for it to others, trusting that they would take care of it wisely.

Now the slaves need to decide what to do with what has been entrusted to them. Slave One and Slave Two—the ones with the five and the two talents—decide to go at once and trade with it—to invest it in things that will make more money.  It would be nice to know how they did it, because they earned a 100% return on their investment!  Like I said, I’m no investing guru, but it seems to me that whatever they did, it must have been pretty high-risk to earn those high rewards.  Things turned out well for them, but it could just as easily have been a disaster.  They apparently trusted that the possible rewards for their Master were worth the risk.

The third slave, though, is what the investing world calls “risk-averse.”  His interest is in protecting what has been placed in his care.  He hides it where it will be safe, so he can give back no less than he was given.  He avoids the risk involved in trading with the money, where loss is as possible as gain.  Although nothing else in the parable tells us that the master is harsh and shrewd, that’s how the third slave thinks of him.  So, the Slave 3 focuses on the possible downside to himself of investing the master’s money.  He’s afraid to try something risky.  Maybe he’s afraid of trying something that is beyond what he thinks he’s capable of. Maybe he’s afraid of failing. Maybe he’s afraid of succeeding—afraid that success will bring change and more responsibility. Hiding the money in the ground seems to carry the least risk.

The three slaves calculated their investment choices and risk factors differently.  The first two saw a chance to give the master back even more than he started out with.  The third saw a chance of giving the master less.  The risk for the first two was that they might fail to increase the joy of their master. The risk for the third was that he wouldn’t be able to hang on to what he already had.

When the master returned, he was greeted by the first two slaves with the fruits of what they had done.  He is overjoyed by what they bring him.  He showers them with praise.  He calls them “good.” He calls them “trustworthy.” Having seen what they were willing to do on his behalf, he offers them even more opportunities.  And most importantly, he invites them into his own joy, to be united with him in his delight.

This story that Jesus told is full of risk—risk for the master and risk for the slaves.  Risk is involved in many of the stories Jesus told. In fact, risk is involved not just in the stories Jesus told but also in the stories of the real-life people Jesus connected with.  It began with Mary and the risk she took as an unwed, pregnant girl, and Joseph, who took the risk first of marrying her and then fleeing their homeland and becoming refugees in Egypt.  It continued with his followers, who risked livelihoods, reputations, social position, and even their lives when they chose to follow him.

God took a risk, too—the greatest risk someone could possibly take.  God risked sending God’s own son into our sinful world with the intent that through Jesus, the world and all its peoples would be reconciled to God and live in eternal relationship with God.  But, rather than embracing Jesus, most of the world rejected both the message and the messenger, nailing both to the cross.  It looked like that risk didn’t pay off.

But then God took another risk.  God raised Jesus from the dead and gave birth to the Church through the power of the Holy Spirit, so that the message and the messenger would live on in the world.  When Jesus ascended into heaven, he left the care of the kingdom in the hands of his oh-so-human body, the Church.  He entrusted this great wealth—his own kingdom and the good news of salvation—to us.  If that’s not a risk, I don’t know what is.

God risked everything to bring the message of forgiveness and grace and salvation to a broken and hurting world.   And God continues to run the risk that we will squander or misuse or hide the great wealth that has been placed in our hands.  God has taken a chance on us, trusting that we will take what has been entrusted to us and trade with it wisely, so that when Jesus returns, we can hand back to him more than what we started with—a kingdom filled with new believers and with disciples who continually reach deeper into their own souls to grow in faith, reach up higher to God in worship, and reach out more widely to the world around us.

When I Iook out at this church, I see a congregation that’s like the first and second slaves—willing to use what we have to give the Master back more than we have been entrusted with.  Individually, you have come to me and said, “I have an idea I want to try,” and new ministries are growing from those ideas. Together, we’re taking a risk on the TAP dinners, to see if investing more of our resources in those families might allow them to encounter Jesus through us. We are taking a risk on our church-wide Advent study, so that our faith might grow.  We’re taking a risk on the Community Thanksgiving Eve Service, so that we might strengthen our bonds with other Christians.

The challenge for us is to look around at the resources God has entrusted to us and see how they could be invested as we wait for our Master’s return.  In our individual lives, we each have talents and gifts and resources to use in new and creative ways.  Whether it is at work or school or in our families, we can start thinking like Slave One and Slave Two: “What am I willing to invest in my own spiritual growth? How can I use what I have to fit my life for God’s kingdom when it comes in all its fullness? How can I use what God has given me to help others want that for themselves?”

As a congregation, we need to think the same way.  It’s true that we are small, we are older, and we don’t have deep pockets.  But our God is a God of abundance, and we share in that. We have a building. We have a parking lot.  We have people with all kinds of skills and gifts and resources.  We have faith that is strong and deep, and we have a desire to make it stronger and deeper. And, we have the best treasure of all—the Good News of Jesus Christ—to share with everyone we meet. How might we invest the treasure God has entrusted to us to produce kingdom-building returns?

Of course, investment of any kind involves risk.  When we venture into something new, we risk failure.  We risk disappointment.  We risk rejection. And, yes, we risk success and the new demands it may place on us. But just as high risk comes with high reward, no risk comes with no reward.  We can choose to be like the third slave and bury our heads and God’s treasure in the sand.  Or, we can choose to be like the first and second slaves, and take risks that will make this church a place that draws those looking to fill the God-shaped hole in their lives.

Through the power of the Holy Spirit, we can be as bold as Slave One and Slave Two.  We can take what has been entrusted to us and trade with it, confident that Jesus will be with us as we do.  We can choose to take a risk and invest in ourselves, in our church, and in our community, so that when our Master returns, we will be able to give him back more than he left us with. The treasure we have been entrusted with is great. The risks we have to take to increase it can be high.  But the reward—for us, the church, and the world—is higher still.  Let’s take the risk. Amen.