Close your eyes for a moment and picture the scene of the angels’ visit to the shepherds.

As you imagined that scene, where were the angels?  Did your scene look something like this? Judging from the results I got when I did a search on Google, this seems to be the way most artists have pictured it. The shepherds are typically crouched on the ground, cowering in fear or craning their necks and shielding their eyes as they look into the night sky. The angels hover above, spilling their light and their songs of praise onto the shepherds far below.

That’s how I always pictured this scene, too, until this week.  This week I had one of those wonderful moments when a passage I’ve read and heard dozens of times offered me something I had never noticed before.  What I noticed were two phrases: “an angel of the Lord stood among them” and, later, “there was with the angel a multitude of the heavenly host.”

That angel wasn’t soaring high above those lowly shepherds. And, after he delivers his good news of great joy, he doesn’t blast off to take his place among the heavenly choir floating among the clouds. The choir joins him there in the meadow with the shepherds! 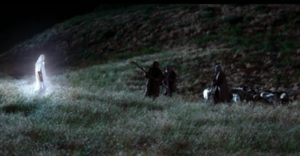 This may not be news to you, and you might be sitting there wondering where I’ve been all these years. It may well be that I’ve sat through sermons and Bible studies where someone talked about this.  But, it completely escaped my notice until this week when those phrases jumped out at me as though they blinking on and off like a string of Christmas lights.  Now, I have an entirely different image of this scene—one that looks more like this.

The angel of the Lord was standing right there with the shepherds in the damp grass that the sheep had just been nibbling on. The angel was at eye level with the shepherds, maybe close enough to smell the odor of sweat from their bodies, close enough that the light of the Lord’s glory enabled the angel to see the worn places of their workingmen’s clothes. Maybe the angel was close enough to see the anxiety on their faces and to reach out and touch their trembling hands in assurance as he said, “Do not be afraid.”

There is a world of difference between these two images. One depicts a God who is distant from us and whose messengers maintain that distance. The other depicts a God whose great desire is to be in relationship with us where we are and who sends messengers to speak to us on our level.

This shouldn’t come as any great surprise. Nearly every time an angel of the Lord shows up in the Old Testament, he appears in the midst of everyday life, unless of course he’s busy smiting enemy armies. The angel shows up by springs of water, under trees, near threshing floors, in the middle of the road, at a hillside campsite in the desert. He shows up where people are working, travelling, resting, worshiping, fleeing, weeping. Whether the angel is delivering an announcement of good news or words of warning, a scolding or a commission, he doesn’t generally deliver long-distance messages. The angel of the Lord comes to the recipient, in the midst of his or her everyday life, wherever that life is taking place.

This, in and of itself, is a sign of how much God loves us. We all know what a difference there is between talking on the phone with a customer service agent half a world away and standing face to face with someone. We know what a difference there is between getting a text from a loved one and sitting across the table from them. The desire, or at least the willingness, to be close to someone indicates respect for them and a desire to be in relationship with them. If the angel of the Lord is willing to get up close and personal with God’s people, that shows the kind of relationship God wants to have with us.

The angel of the Lord was perfectly capable of creating plenty of distance—a distance that could keep the human recipients of God’s message at arm’s length. That kind of distance says, “God is far removed from you, and you are far away from God, and God likes it that way.” It says, “You are beneath God, and God won’t let you forget it.” It says, “You need to respect God, but God doesn’t respect you.”  It says, “God may have created you, but God’s care for you isn’t personal.”

In our human relationships, we sometimes create that kind of distance between ourselves and others. If we can, we maintain a physical distance from those who are strange to us or make us uncomfortable. If we can’t maintain a physical distance, we create the illusion of distance. We communicate our desire to avoid relationship in the same way we communicate a desire to be in relationship—with our body language, our facial expressions, our tone of voice.

I got a real education in how this works a number of years ago when Peyton and I had to make a visit to the Lucas County Health Department.  Peyton was preparing to spend a month in Ethiopia, and she needed some immunizations she could only get at the health department. I walked up to the desk, in my white skin and the nice, clean clothes of a suburban mother, confident that I deserved and would be treated with respect.  And I got exactly that. The clerk looked me in the eye, smiled and politely asked me what I needed, explained where we needed to go, promptly processed our paperwork, smiled again and wished me a good day. Her whole demeanor suggested that she was glad I had come in, and she was glad she could help me.

We had to sit for a while in the waiting room, so I had a chance to watch others go through the same routine. Except it wasn’t the same. As other patients approached the desk, the clerk paid just enough attention to them to take in their darker skin, or their broken English, or their thread-bare clothes. There was no eye contact. There were no smiles or polite greetings. There were only gruff orders and a refusal to acknowledge them beyond the bare minimum required. She communicated so clearly, “I am creating distance between us by not looking at you and not engaging you in conversation, because you are not worthy of my attention.”

Thanks be to God that God wants something more than that with us. God wants a relationship with us—a relationship of mutual love and mutual respect. God is so much greater than us, and yet God calls us “beloved.” God is transcendent over all, and yet God comes to us personally, in the midst of our ordinary routines and travels. God doesn’t demand that we cower in fear or crane our necks and shield our eyes as we seek God’s face. Like the angel of the Lord in our passage, God stands before us, among us, with us, and says, “Do not be afraid.”

The foundation of this loving relationship is what the angelic chorus sings of: “Glory to God in the highest heaven, and on earth peace among those whom he favors.” The angels aren’t singing about peace between human beings, as lovely as that is to think about. They are singing about peace between humanity and God.  This is the peace that restores the relationship which was put asunder in the Garden of Eden. This is the peace that Zechariah sang about in his song. It’s the peace Paul would speak of in his letter to the Romans—the peace we have with God through our Lord Jesus Christ, having been justified by grace through our faith in him.

When we hear the angels singing of peace among those whom God favors, we might think that God’s peace is only intended for those who have managed to achieve a special degree of approval in God’s eyes.  Thank God that this isn’t the case, or we would all be out of luck. Instead, the angels sing not of peace that depends on us, but of peace that comes from God’s good will toward all God’s human creatures. There in that hillside meadow, the angels sang of a peace which God offers to all people.  All people.

This peace comes from God’s delight in us. It reflects God’s desire for those who are absent—God’s longing to be reunited with the lost and the estranged.  I don’t believe that absence makes God’s heart grow fonder of some than of others, but God certainly desires to draw every person close—or closer.

Sometimes this peace grows in our hearts because of a direct encounter with God—a moment when God touches our spirits with assurance and comfort, moments when we feel our hearts “strangely warmed” as John Wesley did. God also uses other messengers—sometimes human ones.  When we are sad or perplexed or weary, God sends messengers who communicate God’s peace and wisdom and love through an arm around our shoulders, a wise and calming word, or an offer of help.

Although the peace the angels sing of is the peace between God and humanity, that peace can’t help but spill out into our human interactions. When we live in a peaceful relationship with God, our hearts grow more peaceful. And peaceful hearts are slower to anger, slower to criticize, slower to take offense. They are quicker to extend understanding, and patience, and grace. The peace we experience with God flows into our interactions with other people.

Today, on this last Sunday of Advent, we lit the candle of love. Out of God’s love for us, we receive the gifts of hope, joy, and peace. On Tuesday evening, we will celebrate the birth of the Hope of the World, the Prince of Peace, when God made the most personal connection possible, entering into our world in human form and standing among us. We will continue to look to that day when Christ will come again, to fulfill God’s promise of a world where peace in all its forms prevails. Until the day, we carry with us the words of the angels who stood with the shepherds: “Glory to God in the highest heaven, and on earth peace among those whom he favors!” Amen.